The idea of "integrating balance" has been on my mind as of late. It started with a barrage of pointless Facebook posts from friends - there was such contrast between certain types of people. Some of them were lofty and spiritual, like a quote from an inspirational book, an announcement, a generalized special message to their internet acquaintances. "Dear Internet Friends and Followers, I hope you found the following quote/message/wise observation as meaningful as I did. Your welcome."

The other kind, of course, was a much more light-hearted, potentially silly, potentially stupid, sometimes funny, usually dumb - "Heyyyy people, some of you know me in real life, most of you I wouldn't recognize if I passed you oh the street but I JUST DID THIS and it was SO RIDICULOUS, OMG."

I rarely care to read any of the above extremes. They irritate me, and they always come from the same people. I started wondering why this bothered me, and wrote an entire blog post in my secret blog about balance. (It's not, obviously, very secret, I just don't advertise it much.) The lofty, spiritual status posters - drew me to start pondering the balance of light vs dark (and good vs evil), and then I started thinking about it in the context of yin and yang, and then I started thinking about the properties of that corresponding symbol and how it translates, quite literally, into a visual, colorful and meaningful symbol.

And finally, this research and intensive thought processes eventually led me to apply this to my biggest, baddest (as in bad-ass) current painting - the Honeycomb Merkaba - which I believe I've now been working on since January. 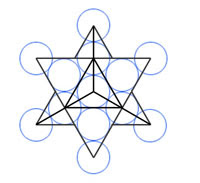 The very shape that is the central geometry of the painting is the merkaba - two interpenetrating tetrahedrons, that are together in this 3-dimensional shape, symbolizing balance, protection, and healing. The tetrahedron that points up ("to heaven") is the "male" and the one pointing down ("to the earth plane") is referred to as "female." In Taoism, yin (according to Wikipedia, literally the "shady place" or "north slope") is the dark area, the female energy, and the yang (literally the "sunny place" or "south slope") is the light area, the male energy. 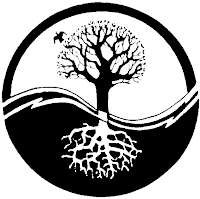 The traditional yin-yang symbol only makes me think of early 90's new age, hippie revival decor and bad tattoos of the same era, so I have no desire to literally replicate that symbol in any of my work - but the tree image above (thanks, google image search), has a much more attractive interpretation of the same idea.

Anyway, I'm trying to figure out a way to integrate the idea of this kind of balance within that particular painting. I've set a goal for myself to have it done to a "hang-able" status by the time of the show, June 3rd. It may not be 100% done, but as close as I can get.

In the meantime I'm continuing to work on a couple other new paintings which I hope to have done for the show. Between my rehearsals for PEXfest performances, working to try and finish all these paintings, and creating the flyer for the show I have the next few weeks completely filled up. I've been neglecting my blog-letter project, but I'm going to try and take the necessary pictures today and get it sent out asap. It's almost been too long to have it relevant, and the subject matter (my not having enough $$ to pay for this ridiculous gallery to show my work) is annoying enough that I've been putting the project off. But I PROMISE - next blog entry, you will see the results from said project. And I will require my readers help and participation to make it work.
Posted by Xtina Carbone de la Schuetz at 10:14 PM

Xtina Carbone de la Schuetz
Xtina is an auteur of the creative underworld - in addition to painting and drawing, she is a performer, photographer, and writer.